We came up with three projects; let us know what you think!

Aloha!
Thanks to everyone who came out for our meeting on Saturday. We had an excellent discussion and settled on three projects for the group moving forward.

This is a pretty dense email, so we are going to lead off with the key points:

1. If Trump tries to replace Jeff Session during the congressional recess, head immediately to the airport intersection to help protect the rule of law.

2. Volunteer to help the KI Mahalo Committee send thank you gifts to congressional offices each week

Now for the dense version…

Establish a Mahalo Committee to send mac nuts and other Hawaiian gifts to Members of Congress and their staff (particularly Republicans) who stand up for our values.

This is something positive that will help balance out the negative calls and protests. We want to reinforce people who are standing up for what’s right. Plus, it turns our unique geographic situation into an opportunity instead of an obstacle. As Lee Anne said when she introduced the idea, “Everyone loves to get something from Hawaii.”

Each week we will recognize someone who has taken a stand and send them a mahalo to say thank you for their efforts. One week might be a small Hawaiian food gift, another week might be a signed poster or a group of postcards, etc. Anyone can nominate a worthy recipient – please help us highlight those public servants who are still fighting for the public.

Passing the cup at the meeting gave us a starter fund of $129. We selected Senators Collins, Murkowski, and McCain as our first recipients.

What you can do: 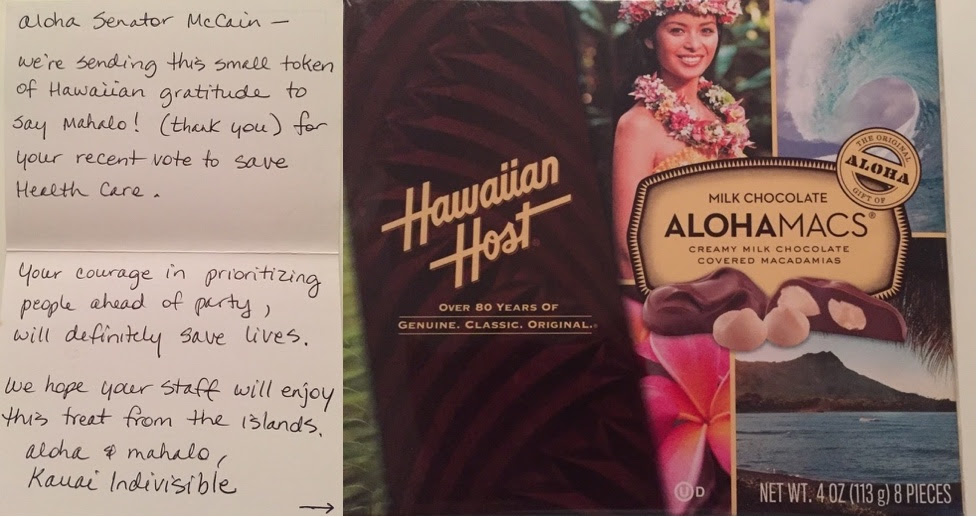 Create a “Poland Plan” so we can take immediate, coordinated action if the Trump administration fundamentally threatens the rule of law.

Most experts agree there is a brief window when the people have an opportunity to save their constitutional rights after a would-be-dictator threatens them. We literally just saw this happen in Poland two weeks ago when their parliament passed a law that would allow the ruling party to appoint federal judges. After hundreds of thousands of people turned out in the streets – the president, a member of the ruling party, surprisingly vetoed the bill. According to one analyst: “These protests were different in a number of ways. It was not just the sheer number of people but the geographical scope — protests swept Warsaw and other big cities and even smaller towns. Even more crucially, the demographic mix of protesters was strikingly different, with an unexpectedly large turnout of young people, who until recently had stayed away from the protests.”

What you can do:

We all agreed we want to take action in 2018. One option is Swing Left, which is creating opportunities for people in non-competitive districts to support candidates in nearby swing districts. Our nearest swing districts are in California and Alaska. We voted to try and support a challenger to Don Young in Alaska’s At-Large district, because who else is going to step up and help Alaska? This isn’t necessarily the final word on how we can contribute in 2018, so if anyone has any better ideas…